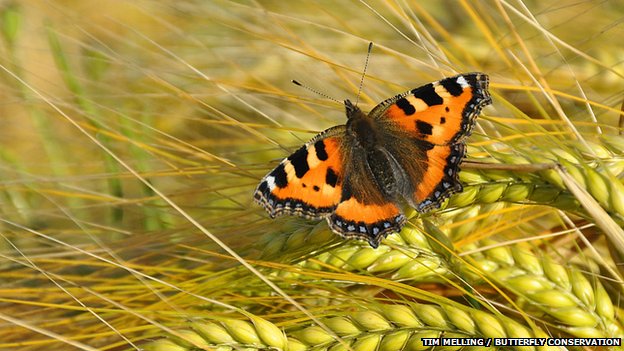 Long, sunny periods provided perfect breeding conditions for some of the UK’s brightest species, it suggested.

But experts warned the mild winter could reverse the insects’ fortunes if they emerged too early for spring.

The survey has been run by Butterfly Conservation, the British Trust for Ornithology [BTO] and The Centre for Ecology and Hydrology since 2009….

Eddie’s comment:  This is excellent news!  For the past few years, there has been a dismaying scenario of butterfly numbers falling, throughout Britain.  This has largely been attributed to inappropriately long periods of cold and/or wet weather, so it is nice to see that a warmer, drier summer brought numbers back up, perhaps to a larger extent than one might have dared hope.

As for the excellent photograph by Tim Melling, some experts say that the European Small Tortoiseshell (Aglais urticae) is actually the same species as North America’s “Milbert’s Tortoiseshell” (Aglais milberti).*

The other two North American tortoiseshells (‘California’ and ‘Compton’) are in a different genus — Nymphalis — the same as the Mourning Cloak.

This site uses Akismet to reduce spam. Learn how your comment data is processed.